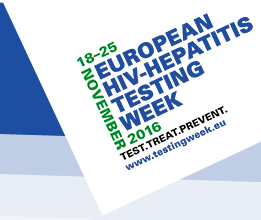 Testing week is an initiative launched by HIV in Europe in 2013 to help more people to become aware of their HIV status. Now in its fourth year and the second time hepatitis testing has been included, European HIV-Hepatitis Testing Week will take place from 18-25 November 2016.

European HIV-Hepatitis Testing Week offers partners across Europe the opportunity to unite to increase awareness of the benefits of HIV and hepatitis testing among those who are at risk. In 2015, more than 400 organisations from across 53 countries took part in testing week and thousands more people are now aware of their HIV and hepatitis status. Through united efforts, we hope that testing week 2016 is an even greater success.